Like most of the people after JEE, I too didn’t know much about computers and programming, though I was curious enough to explore it. After coming to IIT Roorkee, the biggest question was from where should I start? I was advised by seniors in ice-breaking sessions to explore various fields and make use of opportunities available here. Initially, programming seemed so diverse that I found it overwhelming. So, I started learning HTML and CSS, as I had somewhat learnt it in class 10. Through this, I was able to get into NSS Technocreative Web-Development cell. Apart from that, I was able to learn Java in my Object-Oriented programming course.

From the beginning, SDSLabs was continuously organising various competitions on Erdős, Codevillage and Backdoor. Through these, I got to know about SDSLabs and became more inquisite in software development. Then, I decided to look into full-stack development during the winter break and get into SDSLabs.

I still remember, it was 2 o’clock on the last day of SDSLabs’ interview, and the list of selected members was to be declared by the day end. Selected students were getting called by SDSLabs .On the other hand, I wasn’t even called for interview round. (inner me , “bhai ka fir kat gya”).Then I decided to give it one last shot, called a senior and found out that due to some confusion with names, my name was struck off even before getting to interviews. They asked me to come in 5 mins and took my interview, it was conducted in two stages. First round was about general programming and critical thinking, the main motive of this round was to galvanize me. Next round, was more or less a discussion, and to my enjoyment (and to my relief) they were asking about my point of view on certain problems, and it was really fun.

Two hours later, they announced the final list and my name was there.

When I entered SDSLabs, among the first things which grabbed my attention was the pink interior (there’s an interesting story behind that ), which were lined up with achievements of the members and alumni. I was both impressed and inspired by them, and how they were able to achieve so such within such a short timespan at IITR. At labs, we were expected to be complete beginners and a recap of some basic but important topics was provided. Lecture on various topics ranging from HTML/CSS to networking, and emerging fields like bitcoins and blockchain were held. Through projects we are able to apply it for creating awesome and useful applications. While going through this cycle of learning and testing our knowledge, seniors guided us and helped with our silliest doubts.

During that time in February, Microsoft organised “code.fun.do”, my first hackathon, with some help of seniors and spending sleepless nights, a small but full blown application was ready. That encounter with new technologies, developing application and it’s delivering was astounding.

SDSLabs is at its peak when most of the members are there, discussing and developing together. This makes the whole atmosphere very energetic, and most of the time scrutiny is over various topics like unix, devTools and sysadmin stuffs. Through this bombardment of knowledge, I have got to learn a lot. Sometimes, we compete for most hours spent in labs to maintain workaholic environment. Often I have returned at 2-3 o’clock (and fellas, its A.M.), and sometimes even spent the night over there. One of my favorite nights is when we conducted the internal hackathon to develop some of our own applications, got to work in a team and that trifling competition, including the most entertaining part of flying kira’s drone.

Sometimes, gyan sessions from seniors are necessary to keep ourselves motivated. Resources and direction provided by them help in maintaining swift workflow. Following reddit, hackernews and medium has become a part of my daily routine. Without even realising, I have gained so much from labs each day that such exposure wouldn’t be possible anywhere else.

Chapos is one of the in-built features of SDSLabs. Within labs, whenever someone does something great, it means a time for chapo. Every group in IITR has chapos but the frequency and level with which SDSLabs has, are unmatched. We also have an annual trip, last year it was to Rishikesh. Packed with trekking, camping and rafting, along with a lot of fun, it was a complete package. Playing mafia, sharing our life experience, listening to others and late night horror stories made it more memorable. The following day’s rafting and cliff jumping was thrilling. 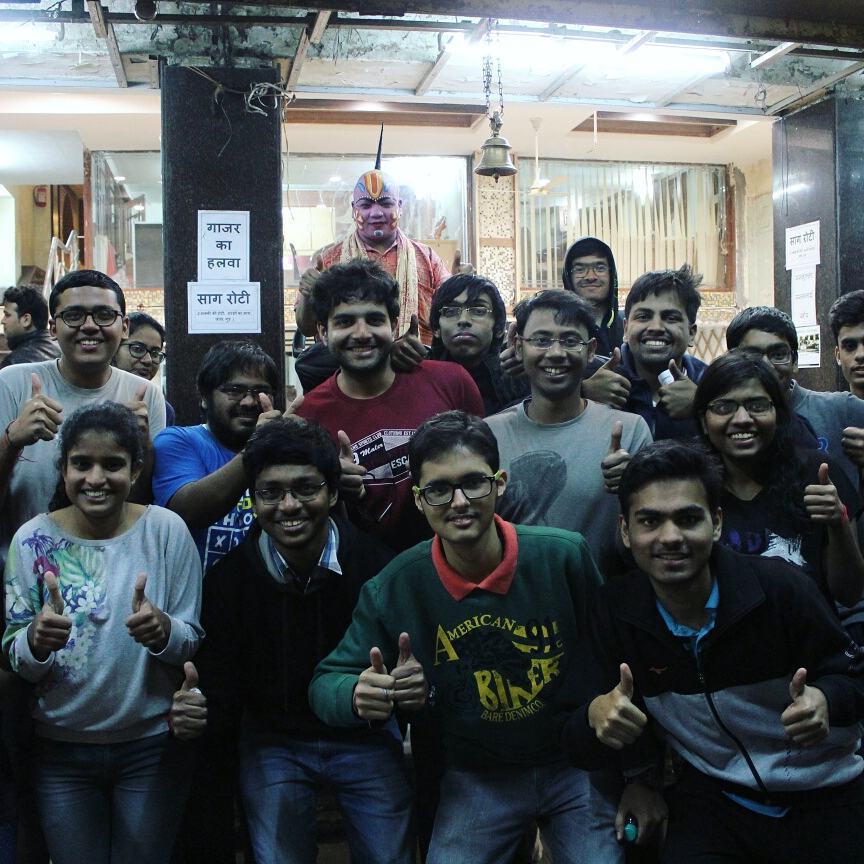 Last year that I spent here has taught me so much; fun and entertainment helped in easing this process and kept me motivated.

We are going to have recruitments within the first half of January and will be looking for some of the most curious and energetic minds of the younger IITR junta. These recruitments are a way of knowing our juniors and letting them know about us.

Waiting eagerly for you. (inner me, “aaye aapka intezaar hai”).