As a part of SDSLabs, I had been involved in building the official website of Cognizance, the annual technical festival of IIT Roorkee and also Asia’s second largest technical fest!

The website is built on ReactJS and Node.js It is a typical end to end application.

I will focus on the react part of the application which is one of the client of our Node API.

Now, as you might know, when webpack does its magic on the code, it generates a single huge bundle file, that contains all the code required for front-end function. Because we are working with single page applications here, this means that browser will fetch all code at once which can lead to slower page loads which can be a bad experience for end users.

Being 4 months into the development, we now have 3 different react apps served on three different namespaced routes, almost complete, but wait, bundled size of all three of them in production is around 900 KB, woot, not feasible for deployment.

From the above production build, we had three apps with average size of 1 MB.

Over 60% of our user base are mobile users and around 40% of them are using degraded internet (around 70 kbps) and we just could not afford to make them wait 10 seconds. We needed to reduce bundle size.

First step was to remove unnecessary npm modules (or unused). Doing a thorough investigation of package.json and the codebase and removing unnecessary imports and corresponding packages was another tiresome job but it proved to be fruitful. package.json can get get dirty when you blindly install some packages for testing and then forget to remove them from dependecies. However, it took us one full day to remove those unwanted packages.

This practice reduced the bundle sizes by around 120 KB.

The introduction of async await

Stumbling upon reducing bundle size, I came across the concept of async await.

It is a new way to write asynchronous code. Previous available options were Promises and callbacks. They are non blocking just like promises.

An async function returns a promise implicitly, and the resolved value of the promise will be whatever we return from the function.

First step was to create a wrapper that would take a component, and return another component. These wrappers are called Higher-Order Components (HOC).

Our HOC is an async container:

The asyncContainer function takes a component as input and renders it when the importComponent resolves. This can be implemented in routes as:

Everytime the asyncContainer is called, it will dynamicaly import the passed container. In other words, when we visit / route, then a chuck file is loaded dynamically containing the WelcomeContainer.

This concept can be extended to individual components too. Suppose we have an header that can be split into two components RightHeader and LeftHeader. So, previously when header was mounted, both of these components used to come within the Header chunk, but now walking on our new path we can make them mount dynamically thus separating the view blocking components.

An example of how header is rendered

We implemented this on every route, login/signup modal, headers, various containers and many more small components. 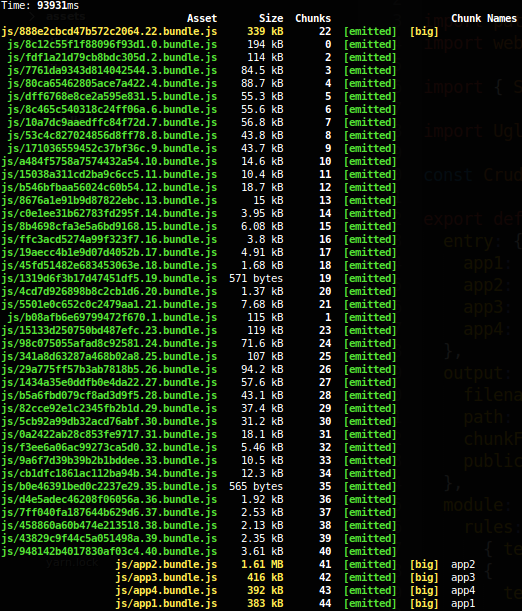 Production build webpack created around 40 chunks (because of use of async/await), that will be dynamically loaded when needed.

This practice greatly reduced the main bundle size and we were under 100KB for app1 (our landing page), this meant max 2 second for landing page loading (Achievement Unlocked).

You also have to include babel-pollyfill because async/await are not included in browser by default.

When served with gzip the bundle futher compresses from 383 KB to 87.2 KB. Yay!

After applying all the above techniques, we were able to reduce the page load time to 4 seconds and first visible button at 2.1 seconds. These stats were acceptable for the time being.

Now, after the successful deployment, the next major problem is the build time. With current config the build time was around 93 seconds, too much!!. We are still working on improving the build speed, but its on hold because of other feature addition to the application.

I will talk about how to reduce the build time in future. Till then,